June is finally here. And don’t let me even start on how excited i am about this month. You will probably ask: Why? The answer is simple: Italy vacation. Anyway, way off topic here, please excuse my excitement. Today i am talking about wearing one of the boldest colors in men’s fashion: Pink. If you thought you could never pull that shade off? Think again! 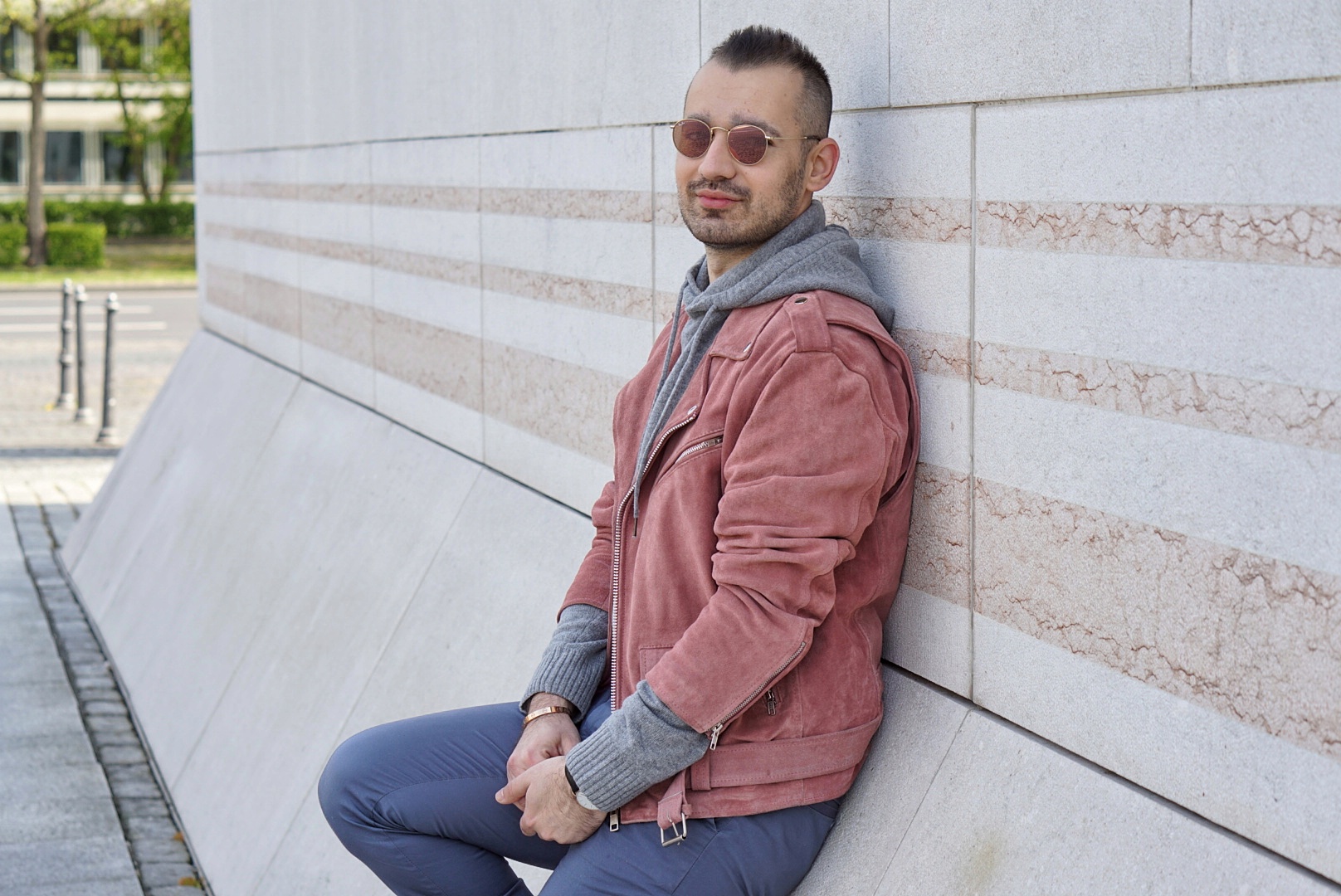 Pink is a pale red color, which is named after the flower called pinks. It is actually a mixture between bright red and white. It is said to represent sensitivity, politeness, tenderness.

The color pink was mainly used in the Renaissance for portraying the flesh or skin.  In the Rococo Era (the 18th Century) it experienced it’s golden age, being worn by Madame de Pompadour, the mistress of of King Louis XV of France, the color transitioned on garments and  in the fashion world.

In England in the 19th Century it found its way in form of ribbons or other clothing decorations worn by boys. Since boys were considered small men and the men wore bright pink uniforms, it was a natural that boys would wear pink. Here it also symbolizes childhood and innocence.

In the 20th Century the color got brighter and bolder. The invention of the chemical dyes made that possible. One of the pioneer of the pink ‘wave’ was the Italian designer Elsa Shiaparelli, who created the Shocking pink. This specific shade of pink was made by mixing magenta with a dab of white.

But the pink turning point to being associated with girls, occurred actually in the USA, on the inauguration day of president Eisenhower in 1953. Mamie Eisenhower’s inaugural gown was in a beautiful light shade of pink.  After that a variety of fashion icons like Marilyn Monroe, Jacqueline Kennedy and many more cemented the role of the color as a women’s one….

In the 21th Century the fashion world knows no limits…. Fashion Houses like Dolce&Gabbana, Fendi, Versace, Gucci and Balmain have combined forces to push the boundaries of colors, forms, fabrics, materials…. everything is used for men and women.

For today’s look i have opted for a more cosy alternative. Although we are at the beginning of June, it is now quite chilly on some days, despite sunshine. I am wearing a warm wool knitted jumper from H&M combined with a light grey fitted chinos from the Swedish label. The shoes are my new Gucci sneakers. And of course the piece in that bold manly color, the suede jacket from Reclaimed Vintage. The accessories are: Love Bangle from Cartier, Gucci belt, Daniel Wellington watch and Fendi bag and charm. 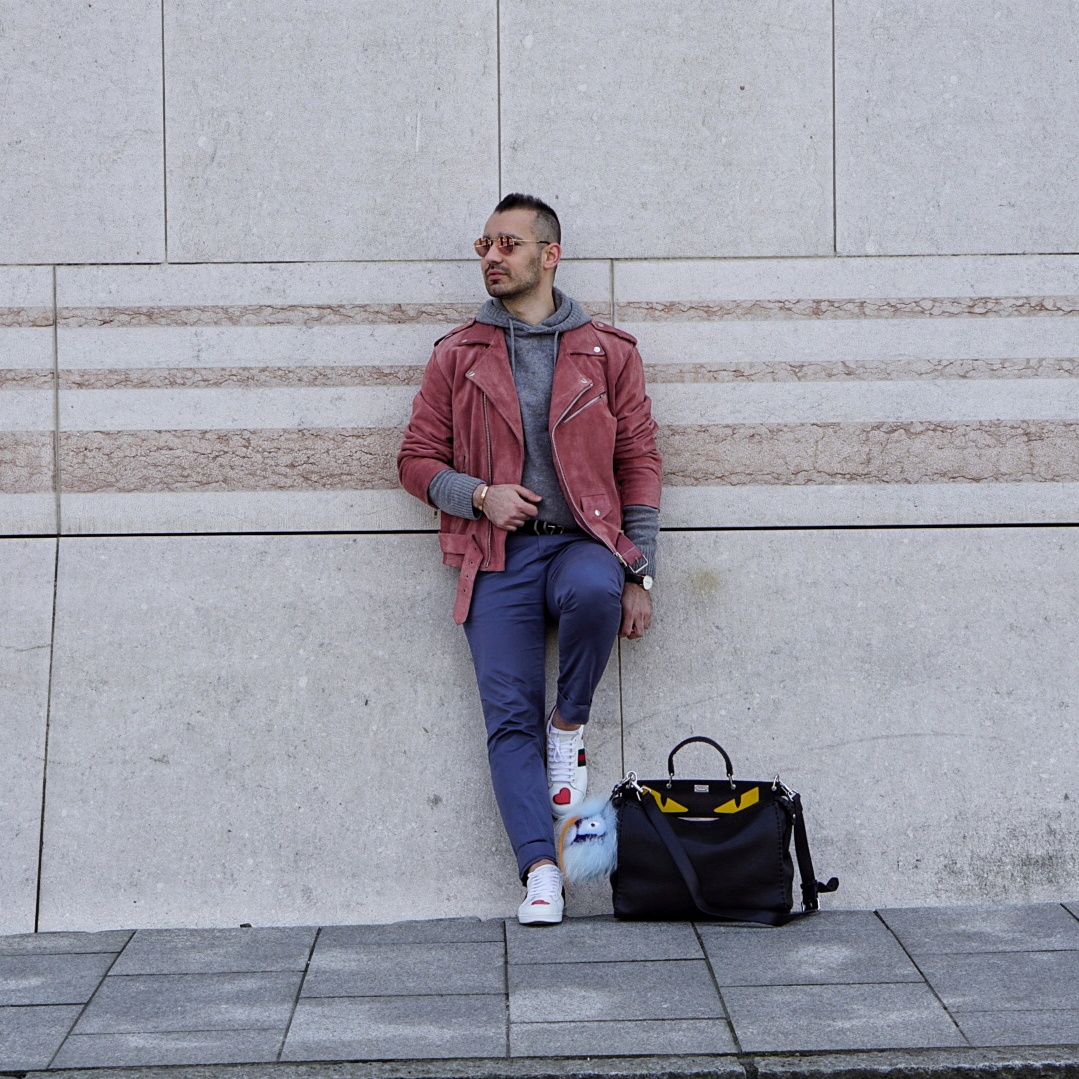 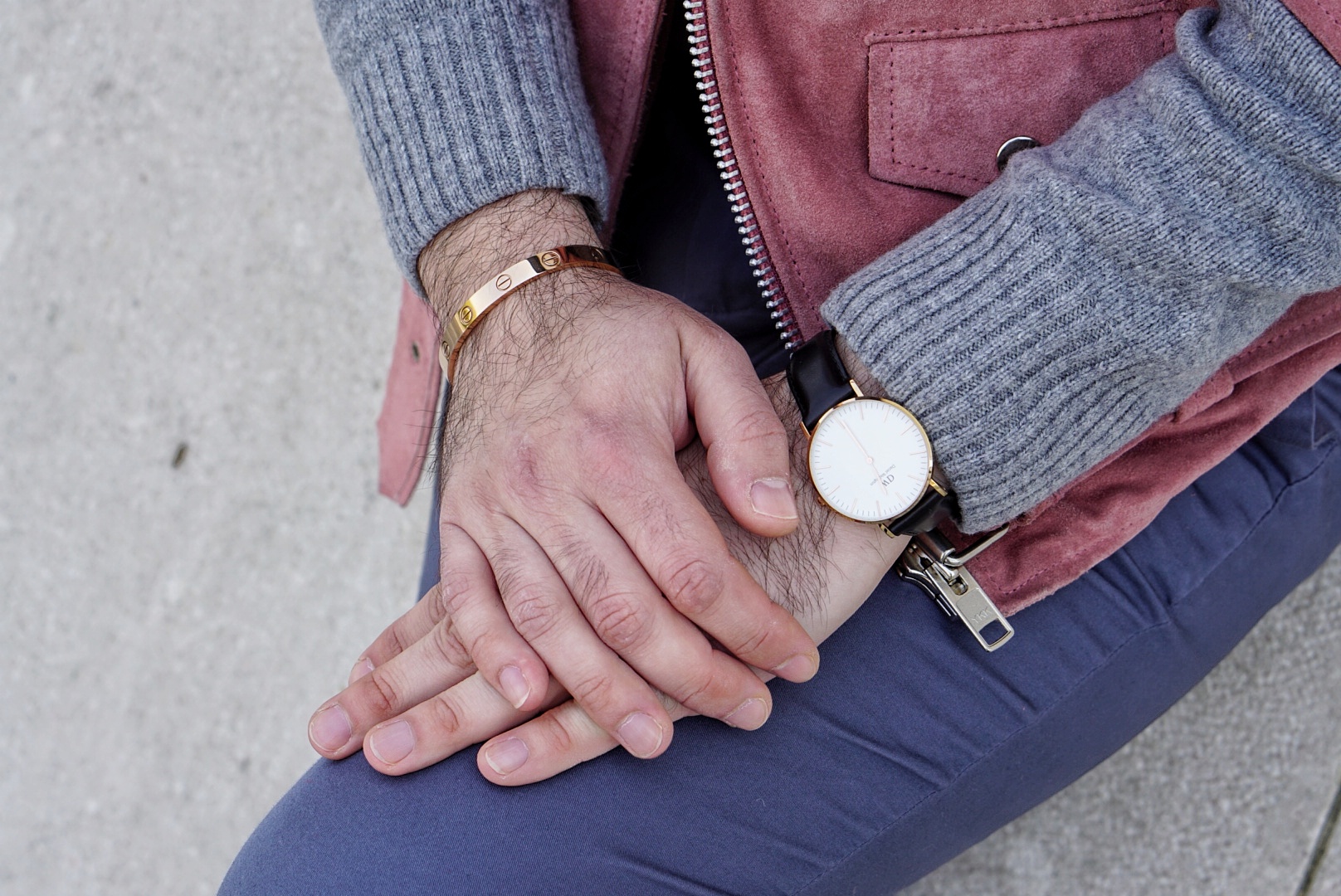 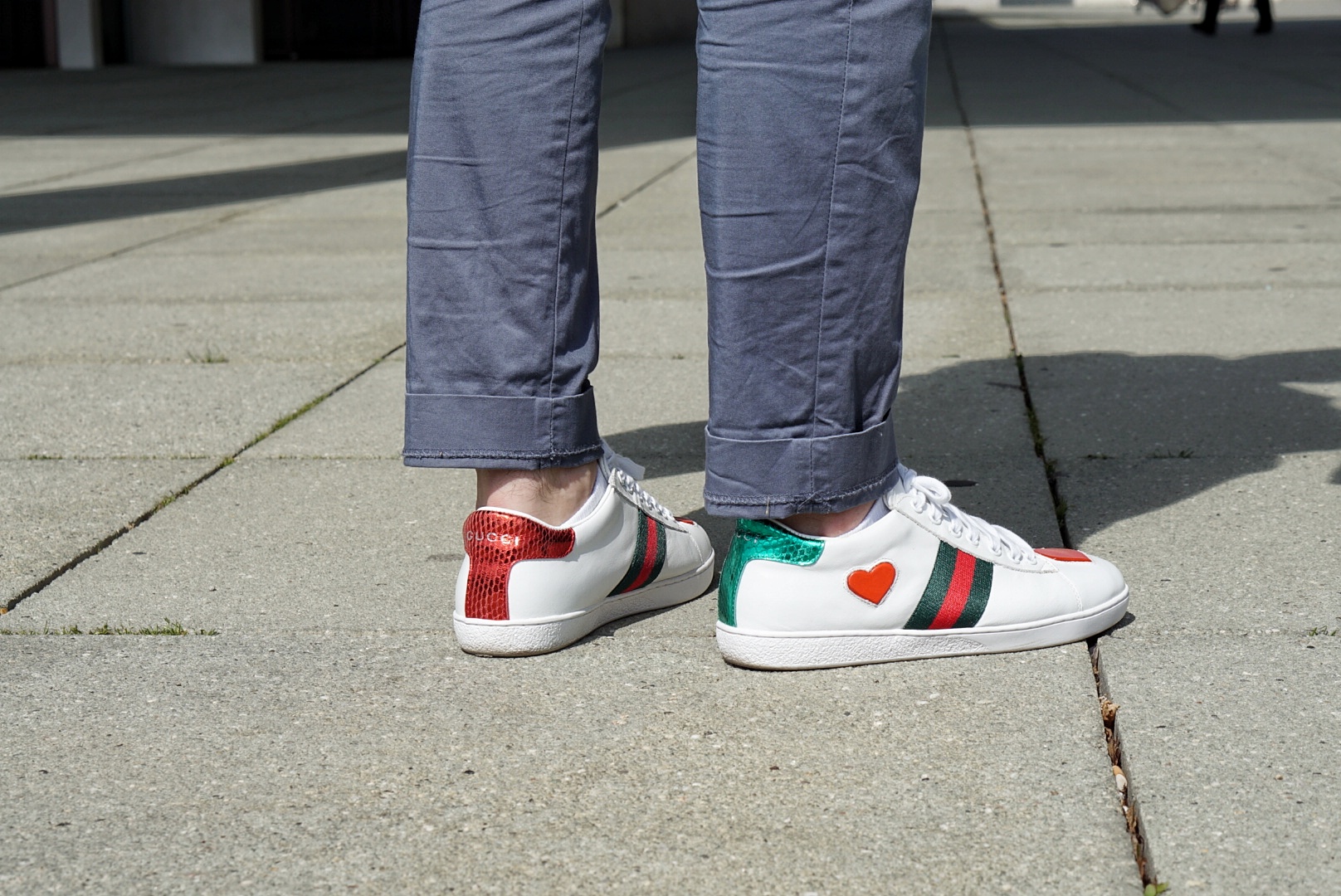 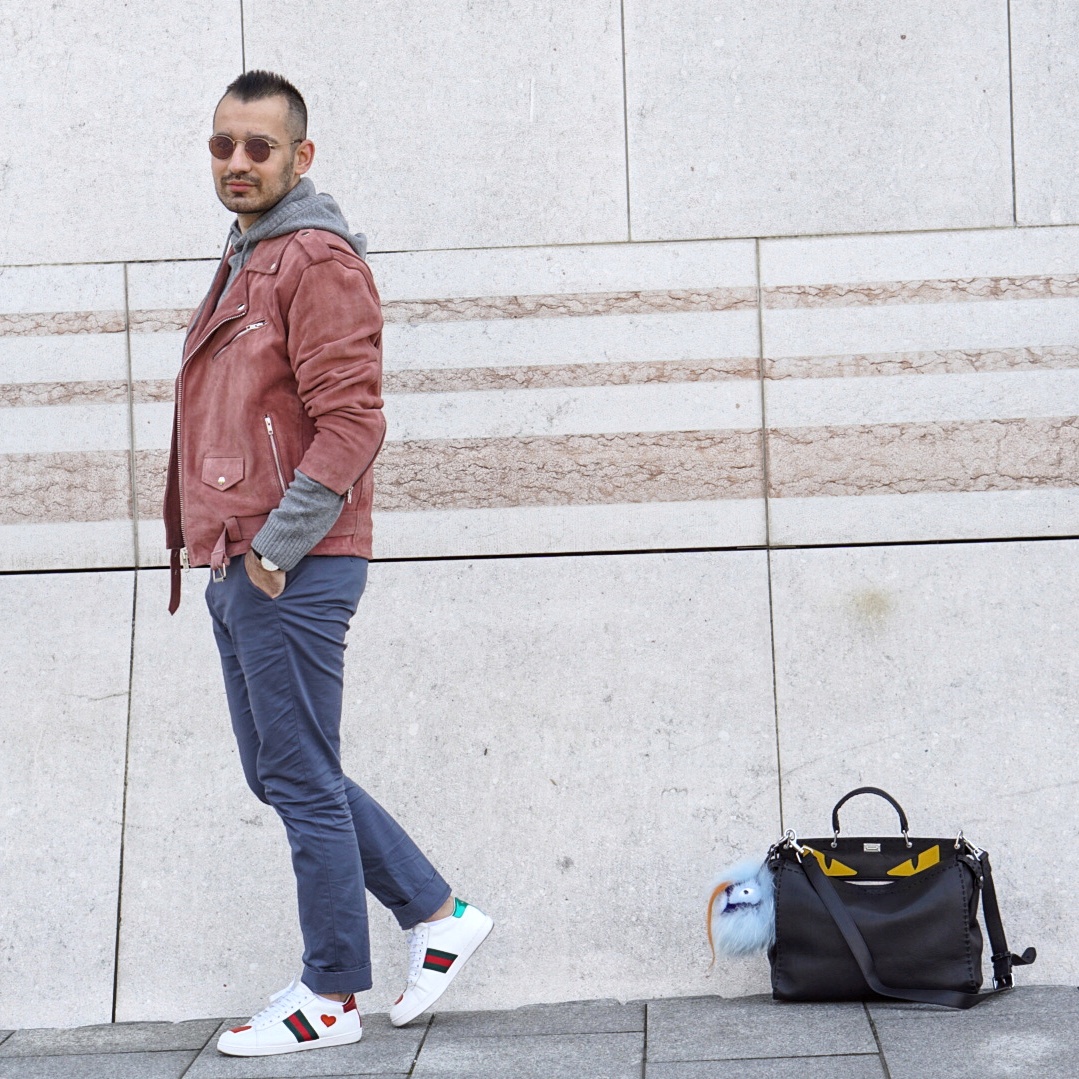 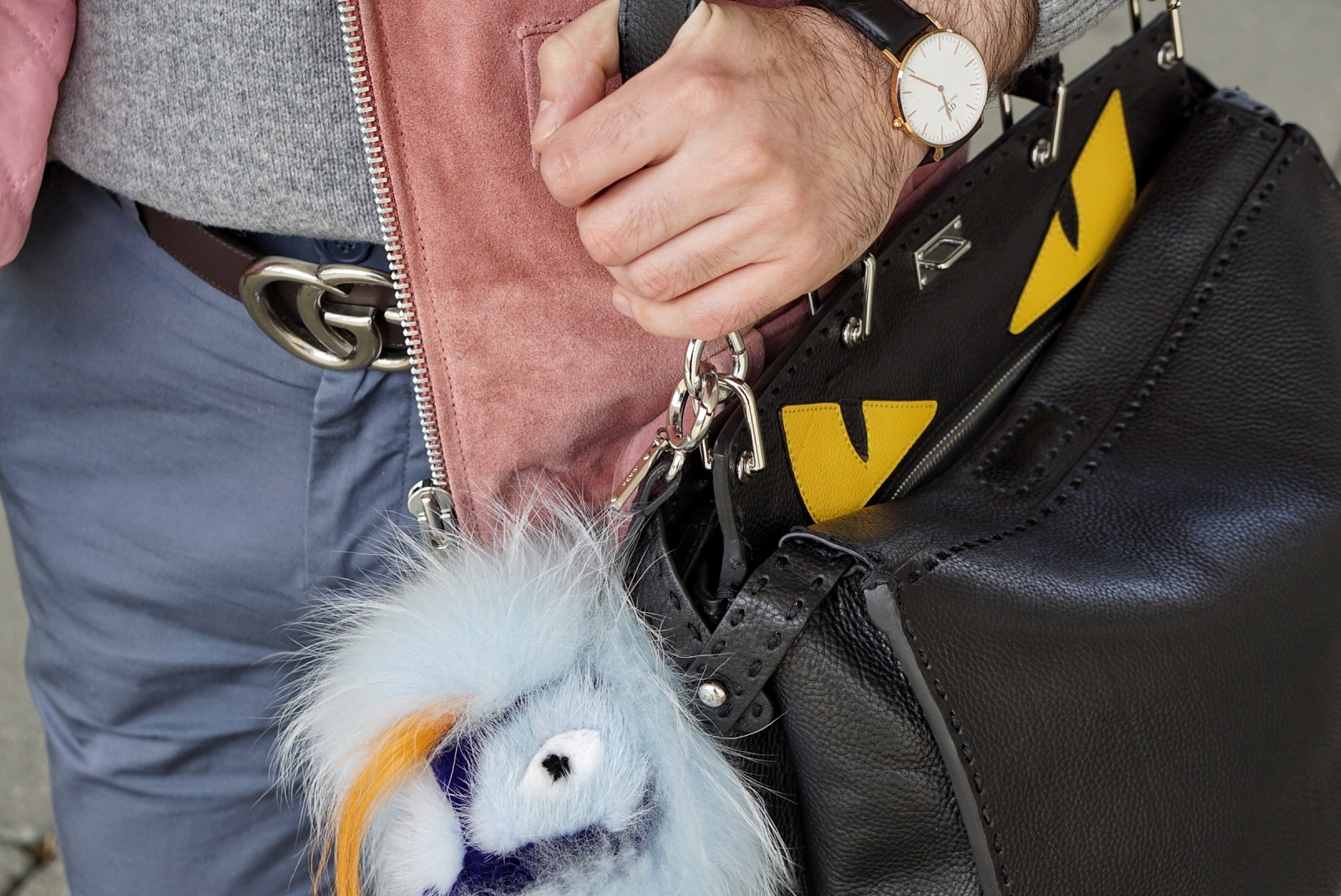 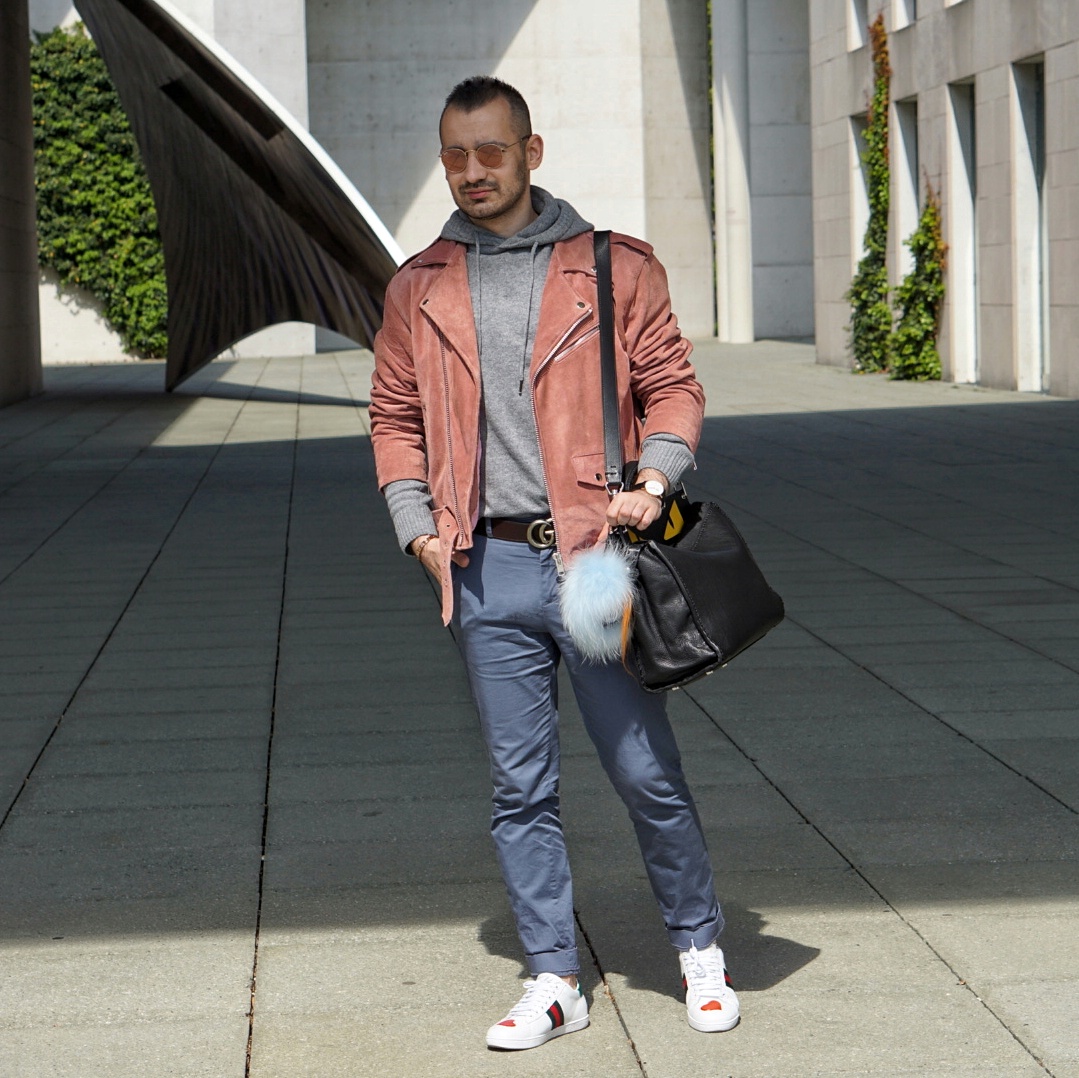 A Day In Düsseldorf

Green on Green in fashion